"Some Sort of Honor"

In this interview three of the first female members of the marching band recall their time as part of this august ensemble.

Suzanne Fluhr ’75 is a retired lawyer based today in Philadelphia.  She suspects she might have been admitted to Williams because she played the oboe but in the band she was the only member of the recorder section, reserving her oboe for the Berkshire Symphony.

Elizabeth Titus ’75 has lived in Arlington, Mass., for about 30 years. Growing up her family was music-oriented not sports-oriented. She joined the band because it was fun, she liked music, and it was a way to fulfill the PE requirement.

Based in Northborough, Mass., Barbara Volkle ’75 is an active volunteer for several environmental groups and bird groups that get people outdoors as well as the National Wildlife Refuge System. She played the melodica in the band because she had one in her room.

Suzanne: The first day, the band director Fran Cardillo asked me what instrument I played. When I said the oboe, he said, “Well, you don’t want to take that outside. So what else do you play?” and when I said I played the recorder that became my instrument. There were many non-traditional instruments in the band–a bass fiddle on a wheel that was rolled around and Barbara played the melodica. Elizabeth was the only one of the three of us who played a real marching band instrument–the flute.”

Barbara:  I don’t really have a music background. And since I was playing the melodica I was basically, you know, a body. When Rich [Levy] stopped by to recruit Suzanne for the band, I was hanging around and he twisted my arm as well. I could carry a tune but I was not a person with any musical expertise. 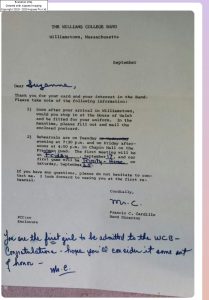 Suzanne: Before I left for campus, I received a letter from Mr. Cardillo about the band schedule and uniforms. He had added a handwritten note informing me that I was “the first girl member” admitted to the Williams College Band and that he hoped I’d consider it “some sort of honor.” The letter is in the college archives.

Barbara: I remember getting a letter the summer before we went to college–it was very clever. I remember they promised a free ride to two away games and a free ride home and talked about how you could use band membership for gym credit.

Suzanne: The formations were a big part of the band performance. We didn’t march into formations, we “scrambled” into them which consisted of running around to get to our assigned places. The band president and others would write a script delivered over the P.A. system. It wasn’t very politically correct–the band would get into a two semi-circle formation for playing the official college anthem, The Mountains. Then they would put a tuba at the top of each “mountain”.

Elizabeth: Or there was the one for Opening Day where we threw out the first trumpet–a trumpet player ran across the field like he was a baseball. 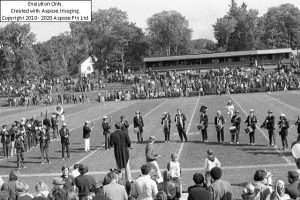 Suzanne: And the narrator would always thank the football team for performing before and after the band concert.

Elizabeth: Helen Kelly was the majorette. She twirled a broken squash racket or a toilet plunger and she had a stripper routine. She was a very slender woman and she would pile on a lot of clothes then walk down the sidelines taking them off while the band played stripper music.

Suzanne: As we said, it wasn’t politically correct….

Elizabeth: I loved the march down Spring Street to the stadium during which we stopped the fall foliage leaf peeping traffic. And we would march through the barber shop and B&L garage on the corner.

Barbara: Our other job was to make a lot of noise during the games–cheers and whatnot. So anything that made noise was welcome and the more noise the better.

Barbara: Everything about the band was fun. Mr. Cardillo was a professional clarinetist and he was just a hoot –he had the perfect personality for the job.

Elizabeth: I do remember from one of the first weekends a big banner that said, “Williams Women Go Home.” But the band was always very welcoming–very wholesome, and just so much fun! 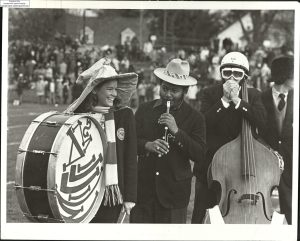