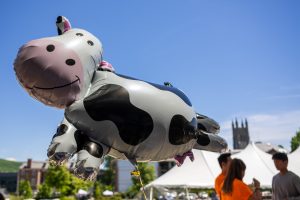 Reunion 2019 brought a record number of Ephs to campus to celebrate. In fact, four classes broke record attendance for the percentage and/or number of classmates that returned for their 20th, 30th, 35th and 40th reunions. Congrats to 1979, 1984, 1989 and 1999 on the record-breaking turnout! Thanks to the cooperation of Mother Nature, the college held its inaugural outdoor Annual Meeting on Sawyer Quad, now also the location of each year’s Commencement.  A highlight of the weekend included a rousing dance party to Hey Jude as the class of 1969 paraded into the quad in celebration of their 50th Reunion. Many thanks to the over 3,200 Ephs and their friends and family who joined us in Williamstown this weekend!

Review the weekend line-up in the full Reunion 2019 program.

197th Annual Meeting of The Society of Alumni

The following awards and announcements were presented at the 197th annual meeting of The Society of Alumni on Saturday, June 8, 2019
Oldest alumnus in attendance was Wayne Wilkins from the class of 1941 celebrating his 78th Reunion!

Jonathan Fitch ’74 won the Thurston Award for his excellent work as Class Secretary.

The Joseph’s Coat, in recognition of a highly esteemed member of a post-50th Reunion class, went to E. Daniels Rankin ’59.

Class Attendance Awards
The Reunion Trophy, awarded to the class with the highest percentage of registered and present classmates, went to the Class of 2014 with 47.7% in attendance. The Reunion Bowl, for the class with the greatest number of members registered and present, also went to the Class of 2014 with 254 members attending. 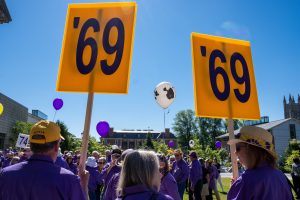 50th Reunion Fund Chair Skip Comstock ’69 presented the Class of 1969’s 50th Reunion gift. The total gift came to $9.72M, of which $3M will endow the Class of 1969 Professorship and $1M will establish the Class of 1969 Scholarship, which will benefit students recruited via the Questbridge Program. Another $1.53M was raised in Alumni Fund gifts and pledges. Roughly 75% of the class made a gift that counted toward the overall total. 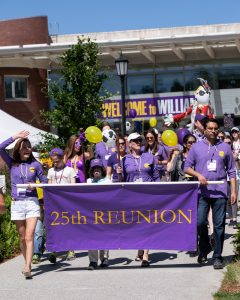 25th Reunion Leadership Giving Co-Chairs Brad Kroh ’94 and Upacala Mapatuna ’94 presented the college with the ’94 25th Reunion gift of $6.2 million, with $1.6 million supporting their 25th reunion class gift purpose, the ’68 Center for Career Exploration, and $1.8 million supporting financial aid. The class also supported the Alumni Fund with an additional $1.7 million in gifts and pledges. Roughly 64% of the class contributed gifts towards these efforts.

Covid-19 is an ongoing concern in our region, including on campus. Safety measures are in place, and campus community members and guests are additionally advised to take personal precautions. See the college's Covid-19 website for information about campus policies. For the latest research and recommendations from the CDC, visit cdc.gov/coronavirus.