You are Now Leaving Williamstown

After I graduated from Williams in 1974, I spent the summer with the second company of the Williamstown Theatre Festival. Marvelous summer. Great friends. Decent theater. After the season was completed, I began the drive back to my hometown outside Boston on Rte. 7, going to the Mass Pike, and passed the “You are now leaving Williamstown” sign. The sense of security and goodwill I’d felt for four years was quickly lifted and I started to sob uncontrollably and had to pull over to the side of the road where I cried for 20 minutes more.

This was not how I had expected to leave Williamstown. 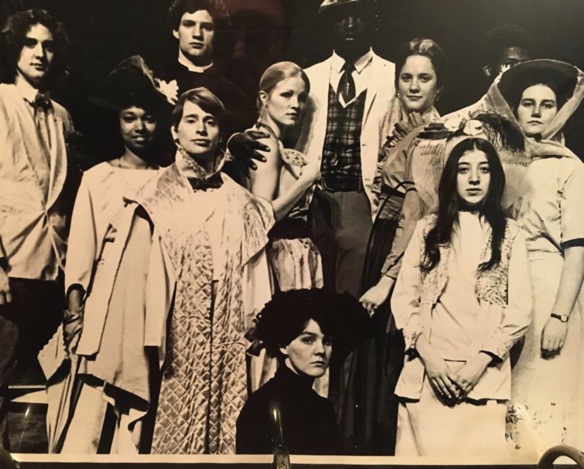 Actors in the musical William Finn wrote and directed during his junior year at the College.

While at Williams, I wrote the music and lyrics for three musicals for the mainstage and directed two of them. I loved reading the novels I read, loved less writing the papers about the novels, but loved being here. I was confused. I learnt, “You must listen to everybody,” but also, “You must listen to no one.” I wanted to do what was right but I wasn’t sure exactly what that was. But I felt I had to fake it, which I did, so I appeared confident and sure, even when I wasn’t. I was confident, but I wasn’t sure about what.

So I stopped writing completely and thought of studying to be a doctor, which was ridiculous. Couldn’t pass a science course to save my life, but I loved being called doctor. A friend of mine was an OB-GYN resident, and I’d put on my blue intern shirt and assist her (not help) between 11 p.m. and 8 a.m. until one day the nurses asked me to draw blood. So I left the hospital and called my friend and told her to go draw blood in room something-or-other and said goodbye to medicine forever.

Here I was, a writer who wasn’t writing who called himself a writer. So I invited the best singers over, and I’d write them little songs. We’d rehearse. I’d cook chicken wings for dinner (the cheapest protein) and we’d sing. Eventually I started writing a show called In Trousers for three women and myself. We performed it many times in my living room with chairs borrowed from the synagogue across the street, and eventually opened at Playwrights Horizons at 42nd St. — first in a small black box theatre, then the larger main stage. Playwrights Horizons commissioned me to write another show, which became March of the Falsettos, and then commissioned me to write something else, which became Falsettoland. Together they turned out to be Falsettos, for which I won Best Music and Lyrics at the Tonys and many other awards.

The road, however, was not smooth. Although it only took seven years to get from leaving Williamstown to Falsettos on Broadway, I felt I’d been wandering in the desert for decades. Don’t expect a road without mistakes. My God, the errors I made — and the humiliations I suffered, the blunders, missteps, unintentional sidetracks — were there for a reason, I guess. I hope.

Here’s my advice: Say “no” as infrequently as possible and say “yes” even when life seems its bleakest. As you leave Williamstown on your way to wherever, I’ll be hiding behind the “You are now leaving Williamstown” sign with a box of tissues. Honk.

William Finn ’74 is a composer and lyricist. He lives in New York, N.Y.

This piece was originally published in the May 19th edition of The Williams Record.

Life and Death After Williams
A Family Occasion