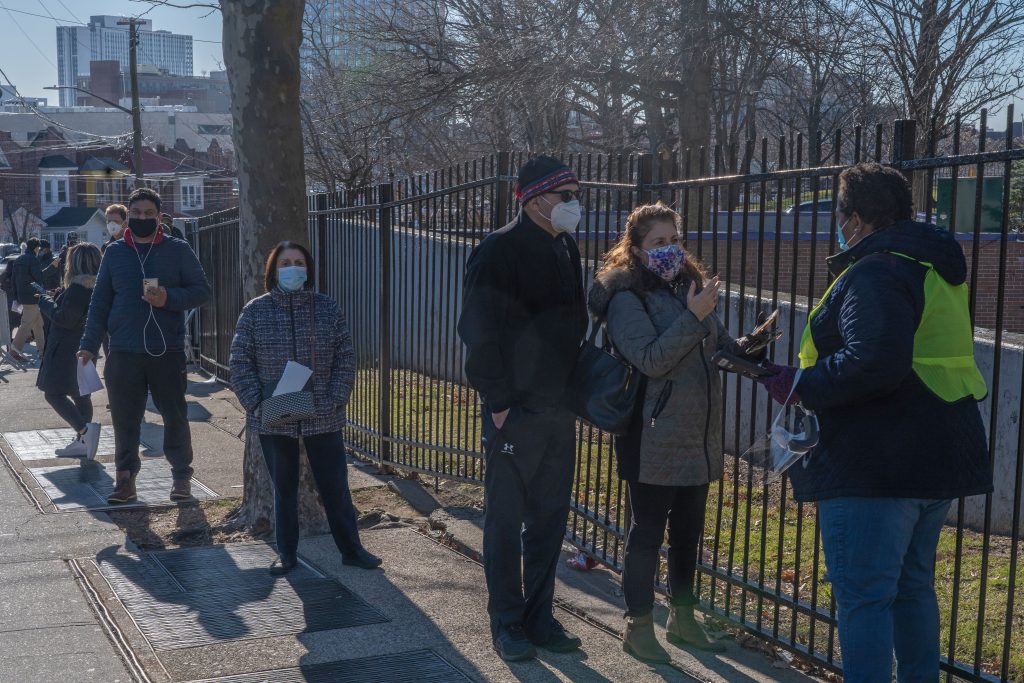 In January 2021, New York City opened city-run points of distribution (PODs) for the Covid-19 vaccine and put out a call for volunteer staff across its municipal workforce, including the Department of Parks & Recreation, where I work.

January 15 was my first day of service with about 80 other municipal workers at a converted high school in Jamaica, Queens. We received task briefings, vests in high-viz colors signifying our roles and big signs to wear if we could speak a second language. Among us we spoke about 10 languages; the borough we served speaks more than 100.

This was so new to everyone, and there was enough nervousness among the public about sharing a building with 200 masked strangers, likely for the first time in nine months, that I never felt useless even in my simple first-day task of helping people turn left. Looking back now on these past eight weeks, I have witnessed how the most reassuring thing to the great diversity of citizens venturing into a high school to be vaccinated has been the great diversity of city workers meeting them: at the door, along the line, giving the shot, booking the second dose—a dozen touchless touches for every person we served.

Week by week, I saw how we were straining not only to mount an unprecedented effort but also to tune our procedures to find so many balances. We needed to process people as quickly as possible, but we had to distance them. We had to enforce a building capacity but minimize anyone’s time in the cold. It was crucial to verify that each person had an appointment so that we wouldn’t run out of supply, but of course we desperately wanted to avoid turning away someone with an appointment that they simply couldn’t “prove.” We were obliged to turn away anyone who couldn’t demonstrate that they lived or worked in NYC, but we couldn’t rely on the simplicity of one form of address-bearing ID, lest we exclude the undocumented.

I later trained to do the front-door screenings, and this became my main role. In the first few weeks, for 19 people out of 20, my job was much like it was on day one: exchange information calmly and briskly, get people inside, help those who couldn’t wait in the cold to enter even faster. But one out of every 20 people had no appointment at all, and one out of every 100 had an appointment but was ineligible. My job then, with as much compassion as I could show through a mask and face shield, was to turn them away.

In those early weeks, when NYC still had a lot of kinks to work out and a very low vaccine supply, virtually all the people I turned away were of qualifying age but couldn’t achieve the massive investment of free time it took to operate a computer and book the scarce appointments. More than one person, trying to verify an appointment, showed me a screenshot of a web page that read, “This is not a confirmed appointment, click here to submit.” More than half of those I turned away thanked me before they left. It makes me choke up to write that, so let me emphasize this point: By “thanked me,” I do not mean a throwaway “Thanks.” I mean a moment, eye contact, a measured intent of gratitude.

Queens is my beloved hometown, and that fact, as much as this historic project, thrilled me: after our year of isolation, in the POD I was conversing, face to face-shield, with more neighbors daily than I ever have. I checked in the broker who sold me my apartment. I met someone whose full name was a homonym of mine; his girlfriend found this all hilarious. There were so many intergenerational families, their American-born children negotiating for silent elders who had appointments. A coworker and a 90-year-old man sang “You Are My Sunshine” to each other as she pushed his wheelchair down the hall. A 90-year old woman capped off one of my shifts by sprinting for the door 10 minutes after our closing time as a few young staff members urged her to please take her time—we were open! She arrived panting but very pleased; she was both deaf and in extremely good shape, and I think she just fancied a sprint.

But when I got home one night that first week, I wrote in a note to my class secretaries, “I am watching (and, I guess, a part of) decades of underinvestment in government tech and emergency readiness that’s creating unnecessary suffering for the elderly literally out in the cold, the lonely who don’t have a child to work their computer for them, the non-English speakers whom we don’t serve at all with our website that uses a seven-page form for booking. I also estimate that we are vaccinating 90% fewer Black people than we would be if our clients reflected the neighborhood’s demographics.”

I wrote those words two months ago; happily, I can say that I absolutely witnessed improvement. Come March, besides seeing proportionally more Black members of the community, I was using my barely adequate Spanish for almost half my shift, and I was seeing a lot more foreign passports and resident cards, which meant we were starting to welcome the breadth of Queens.

At my last shift, there were rumors that NYC may privatize our vaccination operation in May. As of this writing, though, those who live or work here are eligible for an appointment at a POD that is still city-staffed. We have not achieved perfection, but since day one, we have never failed to fulfill an appointment no matter someone’s language or trepidation. We are 80 civil servants forming a path of human waypoints along every step or wheel-spoke of the way from the curb to the vaccination gymnasium and back again. For all our fellow New Yorkers, when their day comes, we have ready their dose and our companionship.