How many Williams-Amherst football games have you attended?

This year also marks what is possibly the first iteration of a regional association telecast of the game. Though in this case, “tele” stands for telegraph, not television.

The gathering was held at the University Club, from which a wire, leased for the occasion, ran directly to Weston Field itself. At the eastern end of the copper line a press operator and telegraph operator, following every movement of the ball, flashed the details of the game play by play to the anxious watchers in the West. Here, within a few seconds of its actual occurrence, each play was reproduced in a startlingly lifelike manner upon a specially designed and constructed electric score-board, a product of the most skillful engineering talent among the representatives of the two seats of learning. Weeks had been spent previously in the design and execution of the details of the device, and the results were all that had been hoped for. And exposition of its principles of operation cannot be made pending the outcome of applications for patents from the United States and Canada, but it is sufficient to say that the progress of the game is shown in all the detail that the spectator on the field enjoys, all the uncertainty and thrills are reproduced, while the observer sits in ease and comfort. (December 1921 Alumni Review) 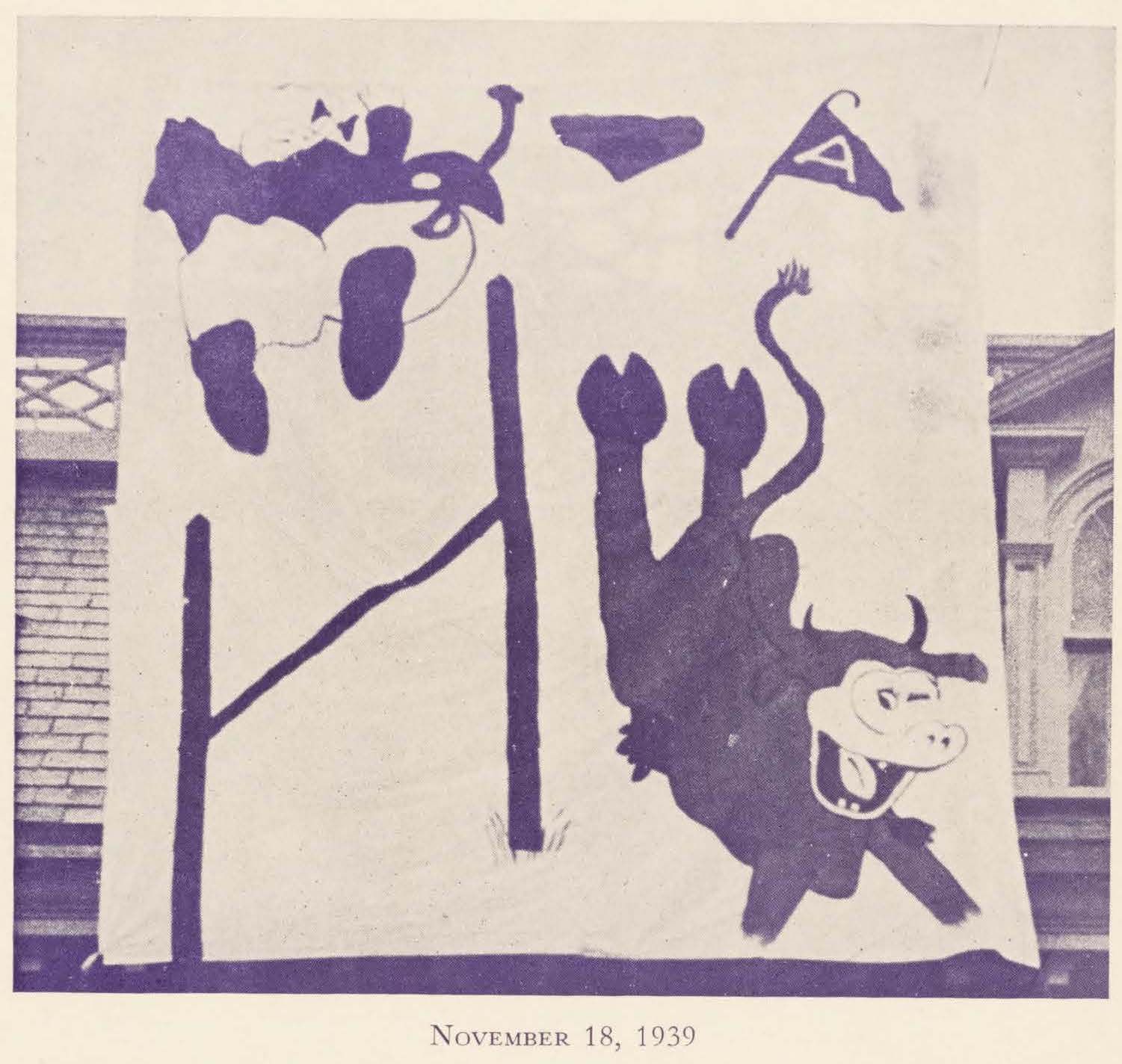 On Friday evening, November 17, one of the most spectacular rallies ever seen on the Williams campus took place, when the whole college, plus three hundred feminine guests and many alumni, poured out on Main Street to parade behind the Williams band. The eerie light of torches and red flares illuminated the fraternities bedecked with banners depicting Lord Jeffrey Amherst suffering every kind of indignity from the guillotine to being kicked over the goal posts. The happy crowd finally gathered around a large bonfire in front of Jesup Hall to give the team an inspiring send-off with songs and cheers. (December 1939 Alumni Review)

Two fantastic photos in the Alumni Review capture the exuberance of the times. 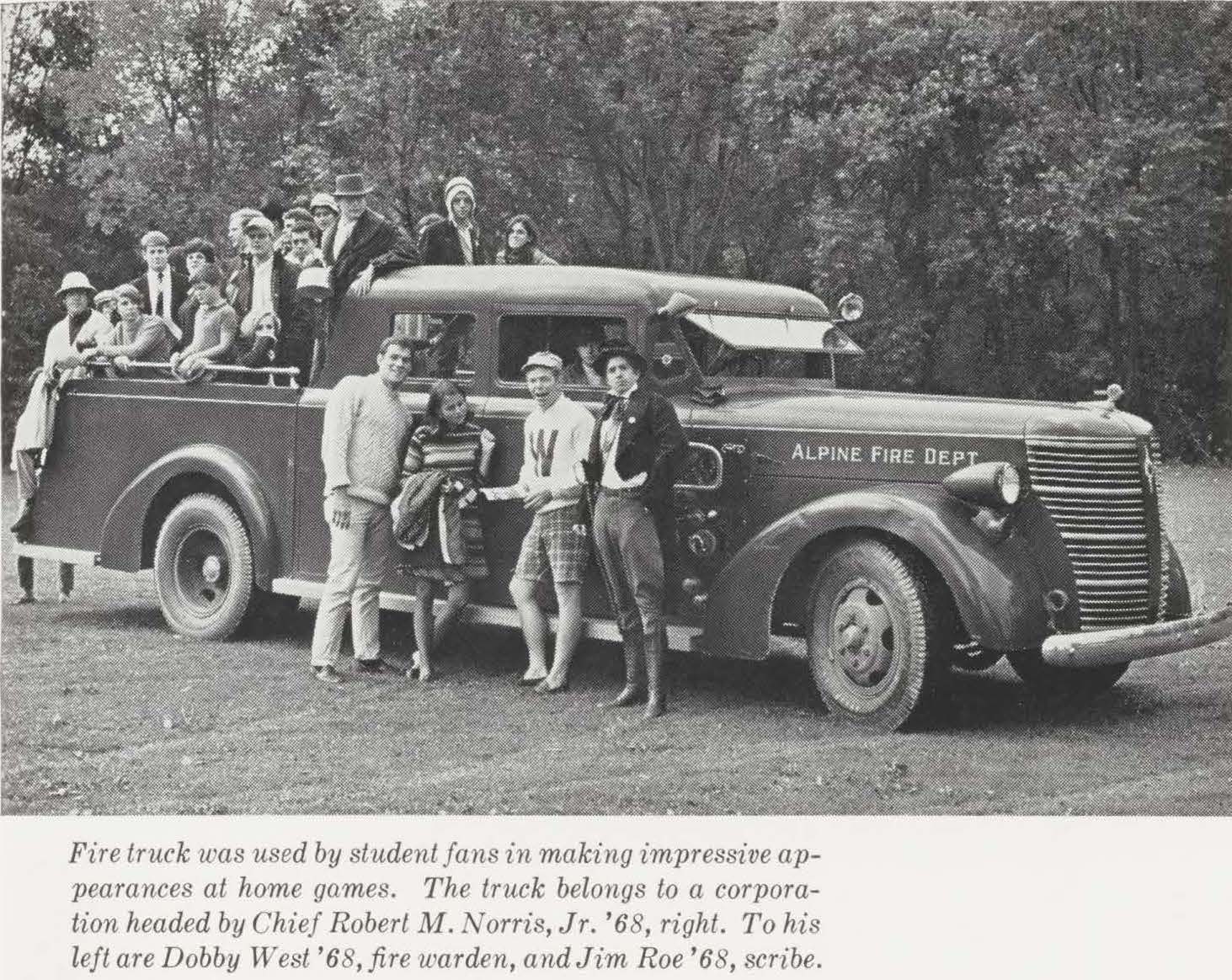 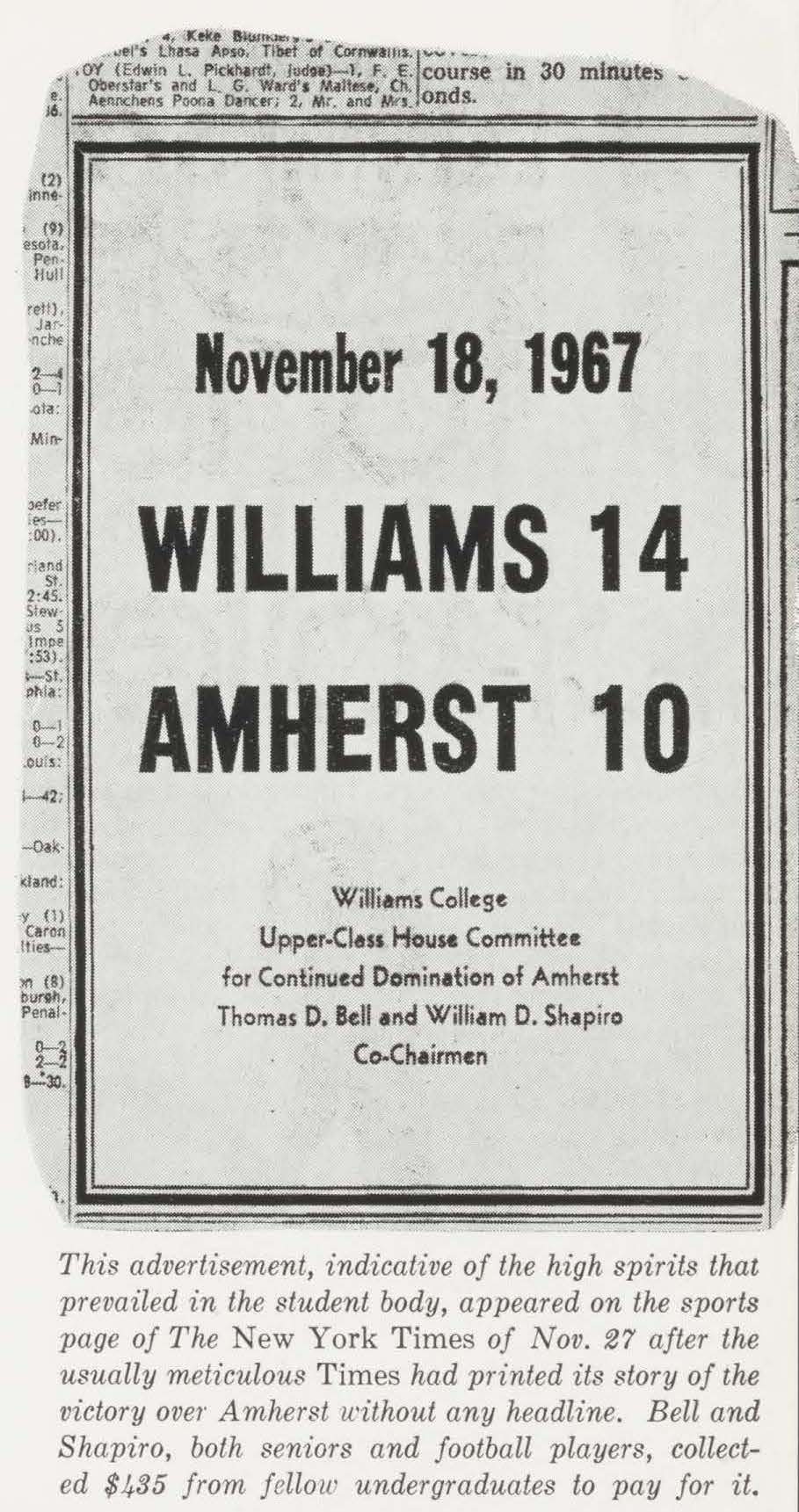 And second, after The New York Times fails to put a proper headline on its game recap, a couple of senior football players place this ad, courtesy of the “Upper-Class House Committee for Continued Domination of Amherst.”

He is joined by his wife, Marywells, attending her 40th game, and together they carry the game balls onto the field for the pre-opening ceremonies.

It seems that on graduating from high school in 1921, Tom and a good friend of his, Jerome Ingalls, decided that one of them should go to Williams and the other to Amherst. Until eight years ago, when Ingalls died, and except during World War II, they attended every Williams-Amherst game together. Tom has kept this going. (Winter 1984 Alumni Review) 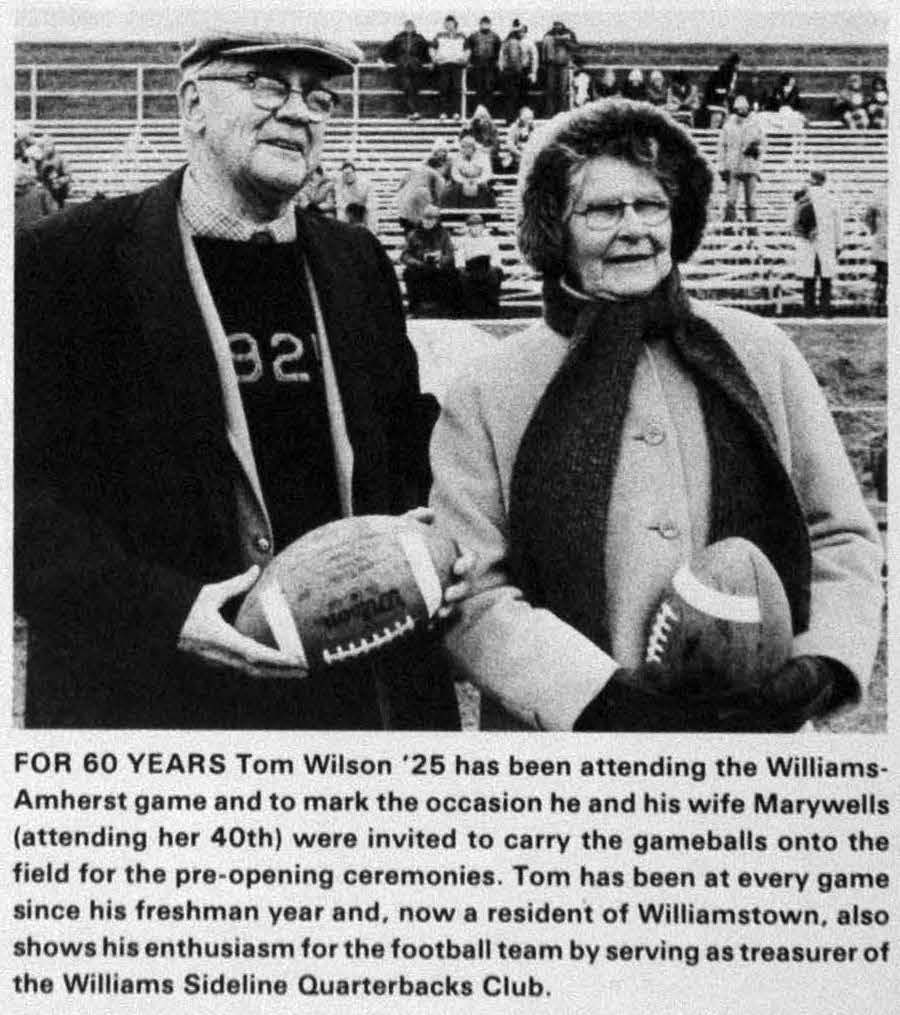 Speaking of football games, Tom Wilson’s consecutive years for attending the Williams-Amherst series remains intact. This year the game was at Amherst, and Marywells and Tom were there. It was his 67th game. It rained hard, and although they got soaked, they stayed in the bleachers throughout! (Winter 1991 Alumni Review) 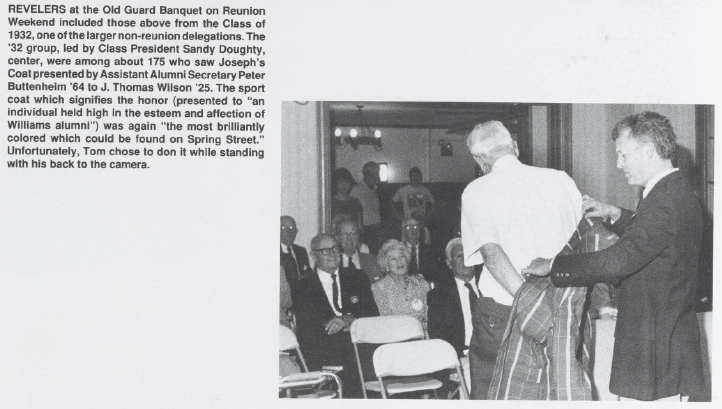 Five months earlier, attending his 65th reunion, Tom was honored with the Joseph’s Coat, presented annually at reunion to an individual held high in the esteem and affection of Williams alumni, joining a storied pantheon of Ephs. “Unfortunately, Tom chose to don it while standing with his back to the camera.” (Summer 1990 Alumni Review)

It is possible that he attended a 68th or 69th Williams-Amherst game, but if so, it was not covered in the Alumni Review. However, nearly every year following his 60th game was covered, so it seems likely that his 67th, in 1990, was his last.

His streak spanned an incredible eight decades. Think about the Williams he entered in 1921, compared to the one where he attended his 67th in 1990.

If there is anyone out there with a streak approaching this legacy, please let us know! We wish you luck and hope that you raise a glass to Tom each year along the way.