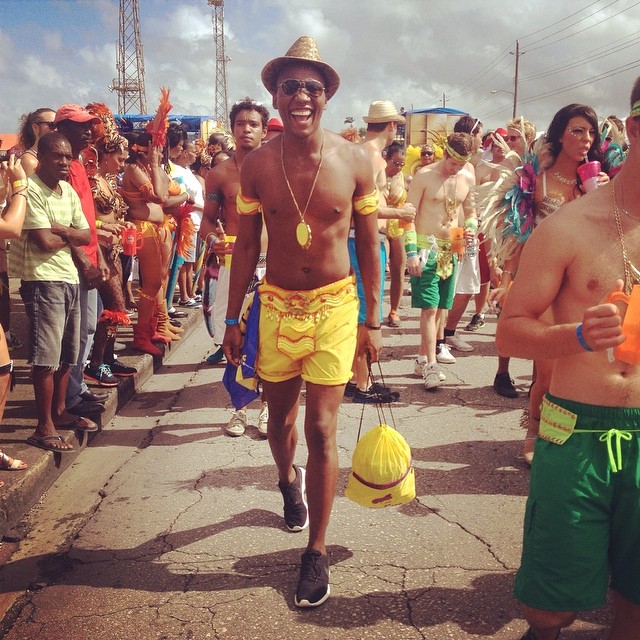 This Juneteenth, I am reflecting on how ridiculous it is that a holiday such as this has not existed in a nationally sanctioned capacity for so many years. As a black Afro-Caribbean American, who moved to the states at 14, I am always translating and comparing each part of myself as I enter different worlds. I am African in my welcoming and open attitude, Bajan in my politeness, dancing, and cooking, but, most of the time, I am a black man in America.

In Zimbabwe, my father's people did not gain independence until 1980. The landslide election of the then hero Robert Mugabe, the granting of freedom from England to Zimbabwe, and the ending of a racist apartheid rule was so profound that my father requested a transfer from his job at Colgate and Palmolive in New York to their office in Zimbabwe. He was so excited to be a part of the rebuilding of his country, Zimbabwe was finally free, and our independence day is clearly our Juneteenth.

In Barbados, there's also an Independence Day but, more importantly, there's an Emancipation Day, which usually happens during the two-week harvest festival season known as Crop Over. Both Emancipation Day and Kadooment Day (the end of the festival) are days of joy. Years after slavery ended, Bajans still celebrate the end of the harvest season because it was the end of the most laborious part of the year for slaves. For the culmination of the festival, Kadooment, Bajan’s “play mass” and dress up in elaborate costumes. We dance from early morning to the afternoon in a parade that starts at the National Stadium and passes by the statue of Bussa, a slave who helped inspire a revolt against slavery in 1816, which heavily influenced the future of the country. The route of the parade conflates the two holidays and represents such a release of joy that I can say that our Bajan Juneteenth has always filled me with pride.

With all this growing up, celebrating freedom was clearly in my bones. So what was up with Juneteenth?

After 14 years in Eastern and Southern Africa, I returned to the country where I was born for high school and was quite ignorant of Juneteenth and what it was to be black in America. Black American history was never really taught in the schools that I had attended and I had pieced together most of it from film, tv, and Arthur Ashe, MLK, George Washington Carver books that my parents bought me. Moving here, I realized that for many years I’d known what it was like to be an American abroad, but I’d never known what it was like to be a black American until I moved here. Blackness, where I was living, wasn't an unusual trait or a huge differentiating factor. Your nationality, your culture, your ethnicity, and your class were way more important than the color of your skin. I remember complaining to a family member that it was almost like I felt the yoke of slavery being forced upon me just by choosing to live in America and I resented my blackness because nobody likes to lose privilege or power. But, in living here, it was the black community that first made me feel at home, claimed me, and showed me black joy. So much of American culture has blossomed from black joy and parts of Africa that the slaves managed to imbed into America: jazz, gospel, soul food, RnB, rap, “street” fashion, slam poetry, drag, and it goes on. I learned to love my blackness and, by Thanksgiving, my aunt remarked that I had lost my accent and that was that.

I believe that across the world, we as black people and all people have all been fighting for freedom. That is why Juneteenth, the day the last slaves in Texas were freed (two years after they were supposed to be) is a holiday that is long overdue its elevation into the canon of what it means to be an American. If you are not black and don’t get it, or are just learning about Juneteenth, I was there with you. I had no idea it existed and I wasn’t even sure how to talk about it with non-black friends. How do I convince someone why we needed to celebrate it? But, when I reflect on many parts of who I am, I understand. How could we not celebrate it? How could we not celebrate freedom? As a gay black cis man, I am constantly gaining and losing power and privilege and it is honestly a confusing mess, but I know that I have to honor the things that have given me agency in the world. Increasingly, I realize that I need to honor things that give any person agency because people gaining freedom is not a loss of my own. It allows us all to show up more empowered and open.

Freedom is what allowed my parents to meet in a foreign country and what helped me choose to start living outside of the closet during my very first nights at Williams. Williams gave me a freedom that healed so many wounds that I had been carrying and, while it wasn’t always perfect, it gave me what I needed to blossom.

Storytelling has transformative power. I believe that by including ourselves, we can make our communities more inclusive. Sharing our stories allows us to bond over common experiences, gain new perspectives, and ensure that history is passed down accurately. As a black Afro-Caribbean gay cis man, sharing my story and how the intersections of my identity affected the ways I navigated Williams and how I move through the world is a way for me to let others coming after me know that someone has done it and that it’s possible to be a Black, gay, third culture kid, and an Eph all at the same time and that Williams can have space for our whole intersectional selves.