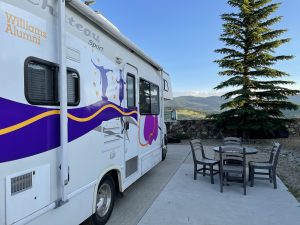 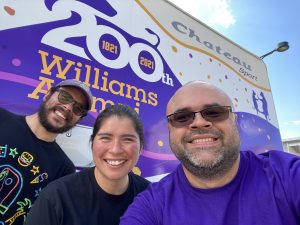 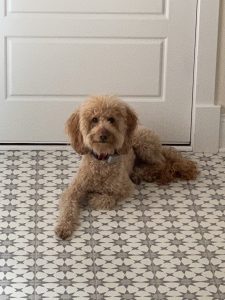 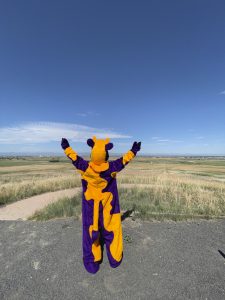 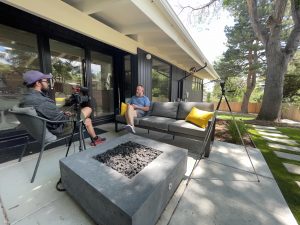 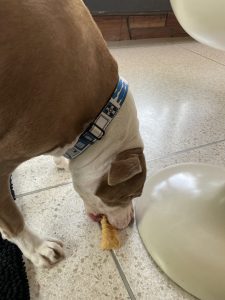 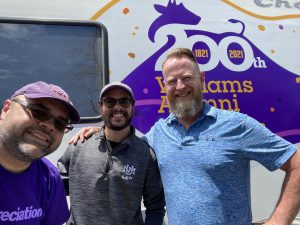 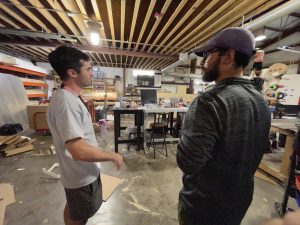 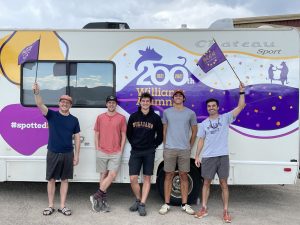 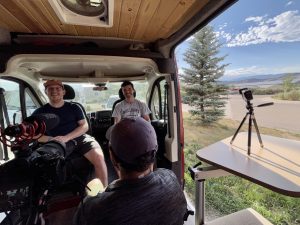 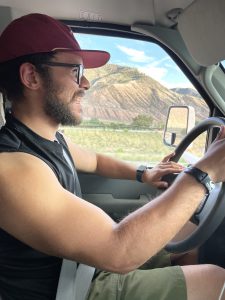 Mike and Juan woke up early to an incredible view from the campground. Before our first interview, we stopped by Cat Vielma’s ‘10 house for a quick coffee and hello (and got to meet T-Rex, her super energetic dog). She recommended we stop by Rattlesnake Hill for a photo of Denver with the Rockies in the background and it did not disappoint. Ephelia even woke up to see what all the fuss was about!

After scurrying up the trail, Mike and Juan went to visit Jason Smith ‘91 at his home in Littleton, CO, where we were greeted by another furry friend in Leia. Jason (who went by Jake in college) currently works as an adoption counselor at the Denver Dumb Friends League, dumb referencing an inability to talk. Here, he works matching pets from a shelter with owners. He shared that his trajectory from small town Nebraska to Williams came through an alum and his post-grad life followed a more “typical” path in finance until he was able to pursue his passion for supporting animals and now loves what he does. This brings back Eze’s interviews in some ways in that hard work provided a platform and space to pivot into a passion. His current dog Leia actually came from the very shelter Jason now works at! Jason thanked us for chatting with him and gifted Mike some coffee for the road. Onward to Gypsum!

The road from Denver to Gypsum is absolutely beautiful. Driving through the canyons, there are beautiful outcrops everywhere. There isn’t much more to add than it was a lovely drive and Mike would not stop saying “Look, rocks!” like a small child.

Mike, Juan, and Nelly arrived at the location of Dave and Matt’s Vans where they got to see the current edition of road living. Dave Ramsay '09 and Matt Felser '09 have entered the market by creating affordable vans with amenities of home: beds, kitchen area, swivel chairs to use for desks and driving. After a brief tour of the facility and an introduction to Walter, another dog from Ephs on the Mooove, Mike got to sit down in Dave’s actual van for a conversation about Dave and Matt’s paths to Gypsum. Dave started in finance and living out of a tricked out van to save up money to start his own business; Matt worked as a teacher and decided to do more traveling and connected with Dave about building a home on wheels. Their shared passion for community and accessibility of this lifestyle led to their company. A big point in the conversation was the remarkable Williams connection and how much they appreciate the Williams community for allowing new, fun ideas and building relationships with people who also think differently. They currently have another Williams alum, Wyatt Sparks '13, working as CFO at the company, as well as two current Williams students interning for the summer, Gus Nordmeyer '22 and Luke Graupmann '23, which is remarkable. After some food recommendations on the way to Grand Junction, we parted ways with Dave and Matt and Nelly said bye to their younger cousins.

After a taco stop in Glennwood Springs, the travelers made it to Grand Junction where they planned for a day of rest and not zooming around states for interviews. Be sure to find your own joy and rest these months folks!