July 5: The Spirit of St. Louis 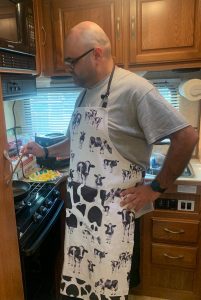 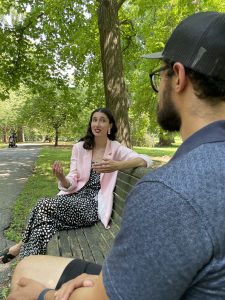 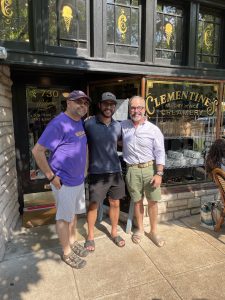 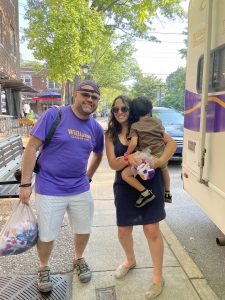 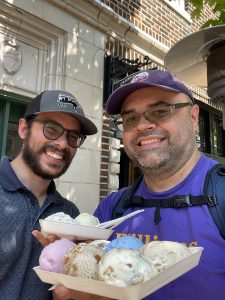 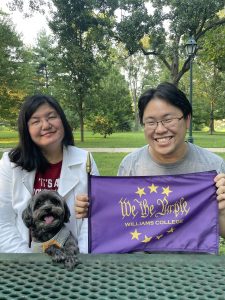 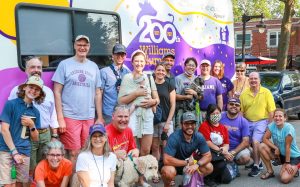 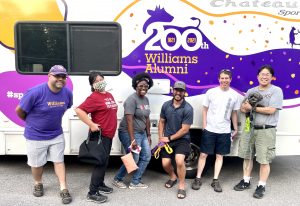 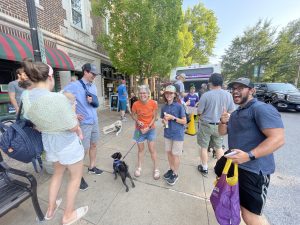 Day four was the low so far, but we were confident we could have a rebound day. A long drive in the morning was ahead of us, Nelly was recovered, and we needed to start the day right: Juan cheffing it up with some scrambled eggs. They did not disappoint (though Mike forgot to have his coffee which made the morning feel a bit longer).

Our adventurers began the trek to St. Louis and the drive was… just fine! We did some outreach to local alums to see Nelly later in the afternoon, no major traffic delays, no flats. For the first time this trip, we arrived EARLY to a location (a wise move with three interviews lined up). First up was Elyse Mack GA’20, who we met at Tower Grove Park. As Executive Director of Bread and Roses MO, Elyse talked about the work her organization does around the intersection of art and social justice, as well as its local impact on youth engagement with art. A native of St. Louis, she brought new perspectives on community, art, and activism with her upon returning from the Grad Art program.

The flurry of interviews continued as we met with Frank Uible ‘85 right afterwards at one of the Clementine’s Naughty and Nice Creamery locations that he and his partner founded. Frank is heavily involved in entrepreneurial efforts with a fifth Clementine’s location opening soon as well as other endeavors. Juan and Mike were reminded of childhood sweetness as we talked about the inspiration behind Clementine’s being a childhood affinity for ice cream. Juan recalled memories with his dad in Colombia sneaking him sweet treats when he was younger. Mike remembered the last time he had cookie dough ice cream like two weeks ago, a child that he sometimes still is. Frank also touched on the importance of finding folks to connect with and really bucking typical notions of “success” and career arc. There are so many spaces to occupy (as we are trying to highlight in this project!) and it is important to encourage and seek out passions. You are your own success story, so rock your narrative however you can. Obviously after a nice conversation like that we HAD to get some ice cream. And then we had too much ice cream. Whoops.

After some more chatting, we realized we were coming up to the time for our casual gathering by Clementine’s with other Ephs. To our surprise, we had over 20 people waiting for us as we turned the corner to where Nelly was patiently waiting. Good on St. Louis for showing up for sure!

As Alumni Relations staff, we have always thrived in spaces where folks can be together and chat, particularly in person. Before today, that felt like a distant memory, a lost sensation. We didn’t know how it would feel to have people together. We agree it was a beautiful sight; it was so nice to hear people talk about their excitement for the project, joys of being connected with other alums, and provided a nice energy for the rest of the evening. People didn’t even realize how many other alums were nearby and were just so glad and appreciative for the opportunity. Mike, Nelly, and Juan were a nice touch too, but the true wonder was in the natural connection, like everyone had seen an old friend for the first time in a while. Maybe they were; maybe Williams people are just cool geeks like that. You decide.

Mike did some mingling while Juan interviewed Caroline Fan '03 and Kevin Hsueh '03  at Forest Park in Clayton, Ohio. Caroline went on to share the work that she does as founder and CEO of the Missouri Asian American Youth Foundation. Much of the driving force for this shift occurred when she worked for city hall, especially after the Atlanta mass shootings (where most of the victims were Asian American) and brought back memories to her from Williams during 9/11. It was a hard experience as she recounted efforts on community organizing to make others feel safe at this time. For Kevin, an infectious disease doctor at Barnes-Jewish Hospital and at Washington University School of Medicine, he shared how infectious diseases always converge with the societal ills of inequity and accessibility. He tries to improve those ills for his community from the medical perspective. On a lighthearted front, when asked to write a thank you note to someone and what it would say, Caroline thanked her husband, Kevin, for the support throughout the journey. They both reflected on the hard toll that community organizing can take and it was a palpable moment of the bond they share for one another.

After a nice dinner at a local restaurant (if you’ve never had toasted ravioli in St. Louis, would recommend), we continued our westward journey with a goal of Columbia, MO. Next stop, KC with some wings and bbq on the horizon!

PS: Remember those eggs from earlier? Juan broke the rest of our eggs due to poor storage in our fridge. Mike was a sad egg.