July 13: From Mountains to Oceans 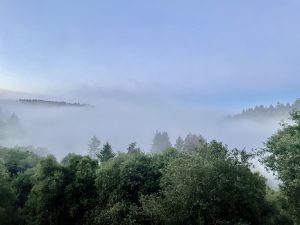 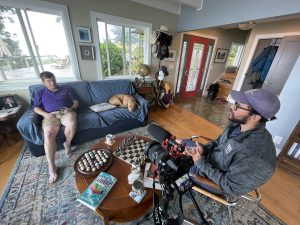 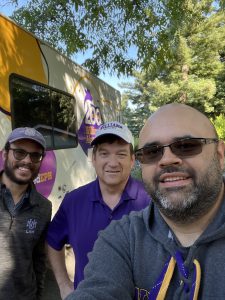 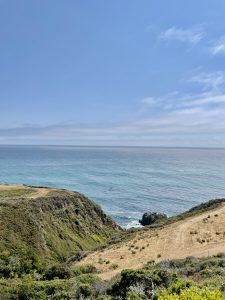 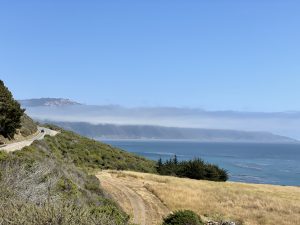 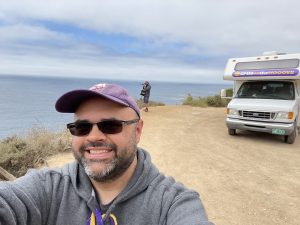 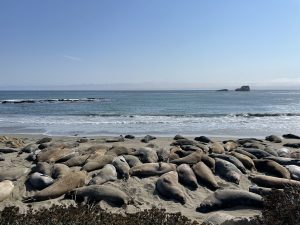 The morning came with dense fog over the Santa Cruz mountains, a welcome sign to help limit fires. We had some coffee and enjoyed interviewing Steve Troyer ‘86. His narrative has strong ties to Williams, particularly the rugby team. His kind of “found family,” this community has been a personal and professional resource, and his involvement helped him stay focused and structured while a student. By the end of the conversation, the fog began to lift, there was a small photo op with Steve and his wife Presley by the RV, and we were on the road. The drive down to Malibu was about 7 hours, with a stop in Monterey and all along the Pacific Coast Highway adding significantly more time. Views were plenty: waves crashing against rocks, large cliffs, blue oceans, elephant seals, birds in the air, and plenty of winding curves. We even saw the most packed In-and-Out ever, basically two lots full. Ok, locals might say that it’s always like that, but when you come from small town Massachusetts, four cars is a lot. Anyways, all this driving gave us time to think about a whole host of things, from how we define and shape community, finding your own voice and space, privilege, connecting with new people, reckoning with the past. Seems like we had a lot on our minds. Here are some thoughts from each of your adventurers:

Mike: This project has given us many great conversations and reflections. We’ve had people share with us their passions, their senses of disconnection, their thank you's, their space. This has been humbling, but also inspiring. Not for the work they are doing (which has been amazing for a ton of reasons), instead a reminder of the work to do for being in a community. Everyone has a story, good, bad, in between, that defines who they are. We must respect that and let people into the fold when they are ready. One of the most important parts of a community is space, both for making room and for allowing people to take the space they need. For those distanced, sometimes reaching out is enough to get them reconnected, other times there is a lot to work through for someone to feel comfortable. Sometimes people want nothing to do with us, and that is fine. Everyone is on their own journey.

Juan: It is not often until you step outside the ‘bubble’ of the Purple Valley that you realize life continues beyond the four years as a student at Williams. Though I come from outside the United States and grew up in the metropolitan NYC area, I have never left Williamstown since graduation in 2007. Meeting alumni within their communities has given us a different framing for what shapes who they are and how they connect with it. A common theme that has emerged in our conversations is a notion of ‘effortless perfection’ that can still permeate the narrative for a post-Williams journey. You know, that notion of seeing your classmates doing large-scale achievements, having their families, climbing the highest peaks of the world, etc. Meanwhile, you feel like you don’t measure up to that notion of success or what’s supposed to be the prescriptive nature of our paths. We live in a world where technology, norms, and various forms of oppression can dissuade us from feeling like we belong. Yet, the reality is that underneath the veneer of expectations and optics to the outside world, there’s more in common than we think as we strive to find what’s really meaningful and important, especially after the past year and a half.

In our experience, these simple touch points have, in some cases, been an opportunity for people to feel seen and be appreciated for going through their journey at their speed. The stories we are collecting will each resonate with someone, whether it’s through shared interest in professional work, geographic location, or just feeling of belonging. We are building on the notion that there’s a place for you, whether that’s at the heart of Williams-mania or as far away as you can get. Your story matters, shared with us or kept to yourself.

This trip has taken us through the mountains and all the way to the ocean. The coast is an interesting spot: huge mountains are being eroded by the very fluid ocean. There’s something about the healing water transforming ancient and storied mountains. Space, time, and water can move mountains. Or something like that, I am not a poet. Find your own meaning in the imagery. Hope you enjoy some coastal photography with some elephant seals. Photography is a skill of mine, not poetry.

Here’s something someone else said about mountains and oceans that isn’t what I’m getting at, but is still beautiful and kind of related.

“Mountains and oceans have whole worlds of innumerable wondrous features. We should understand that it is not only our distant surroundings that are like this but even what is right here, even a single drop of water.” -Dogen