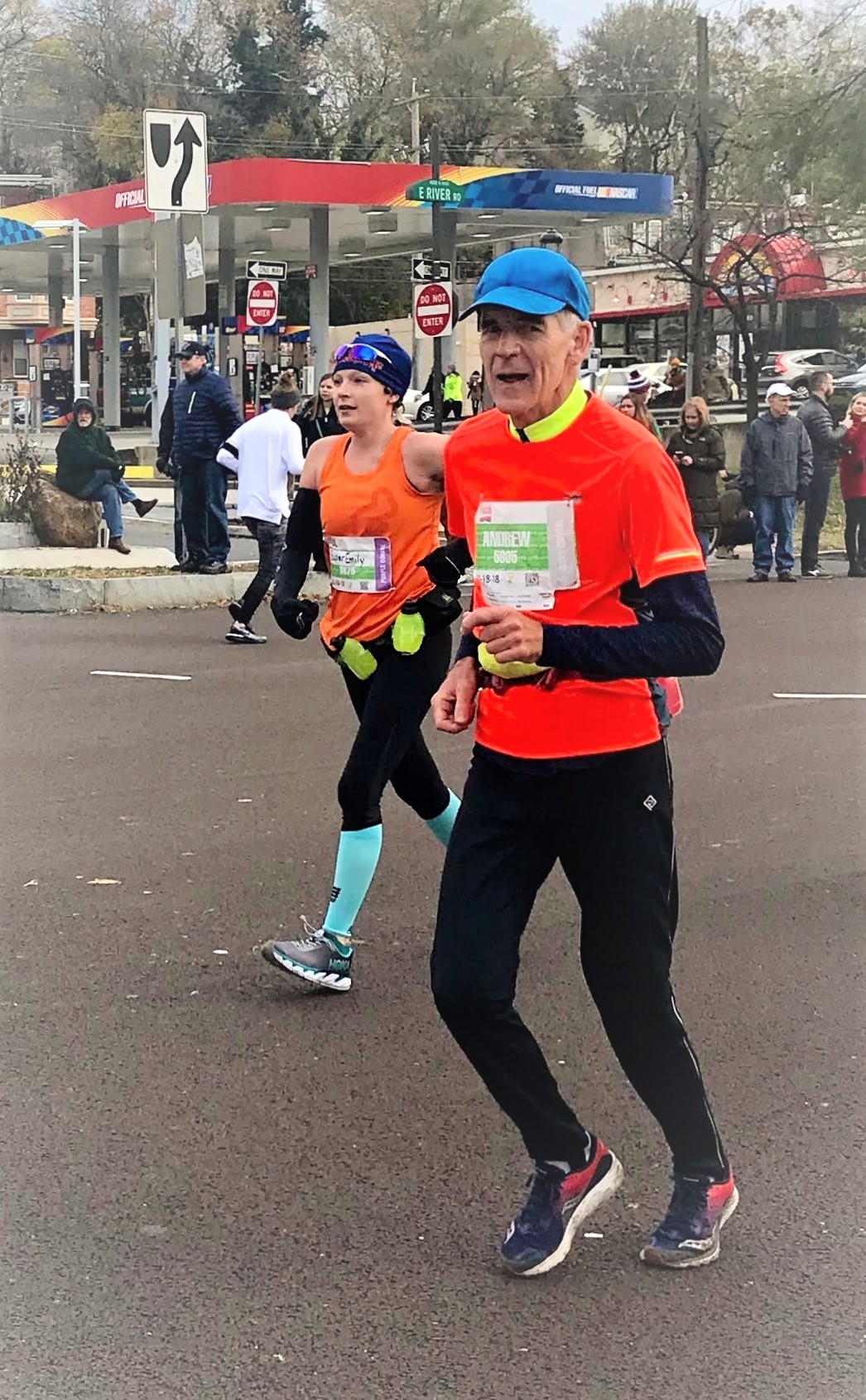 It’s hard to explain why, at age 68 with asthma, I ran and completed the Philadelphia Marathon after four years of sometimes grueling effort. If this strikes you as foolhardy, you can blame Robert V. (Bob) Behr ‘55, legendary high school running coach and, later, a longtime Williams administrator.

Running has been part of my life through ups and downs: the arrival of a new child, the ending of a marriage, the beginning of a new relationship, and recovery from serious illnesses. At every stage, especially when resilience was most needed, I drew on the memories of Bob on crisp fall afternoons in the 1960s, standing in Rockford Park with clipboard in hand and a stopwatch on a lanyard. Chances are his team was about to trounce the competition. He was the coach of Tower Hill, my high school’s cross-town rival. He was quietly in command.

I was just 14 when I first encountered Bob in his role  as a cross-country coach in Wilmington, Del. Although he was never my coach, teacher or mentor, he made a strong impression on me years before I was admitted to Williams. He became an indelible role model and taught me to strive for excellence in running and in life.

As the Alumni Society celebrates 200 years, few alumni have served Williams so long, so well, and in so many capacities as Bob Behr. Bob was the former director of the Alumni Fund, director of Alumni Relations, and creator of the popular Alumni Travel-Study program, one of the best of its kind in the country. Over the decades he also served the class of 1955 in various roles, including 50th reunion chair and class president. And he may have helped a few Williams track coaches along the way, though it wasn’t in his job description.

When Bob received the Joseph’s Coat award in 2015, on the occasion of his 60th reunion, the citation read, “After a lengthy stint as a beloved teacher, coach and mentor at the Tower Hill School in Wilmington, Del., he and his family returned to the Purple Valley in 1980 to begin a chapter of his Williams career that continues to this day.” Before Bob began that impressive second chapter as a Williams administrator in his 40s, he had already achieved a record, at a small private school, as one of the most successful track and field and cross-country coaches in Delaware’s history. He developed numerous state champions and nurtured unbeatable teams for 19 years. 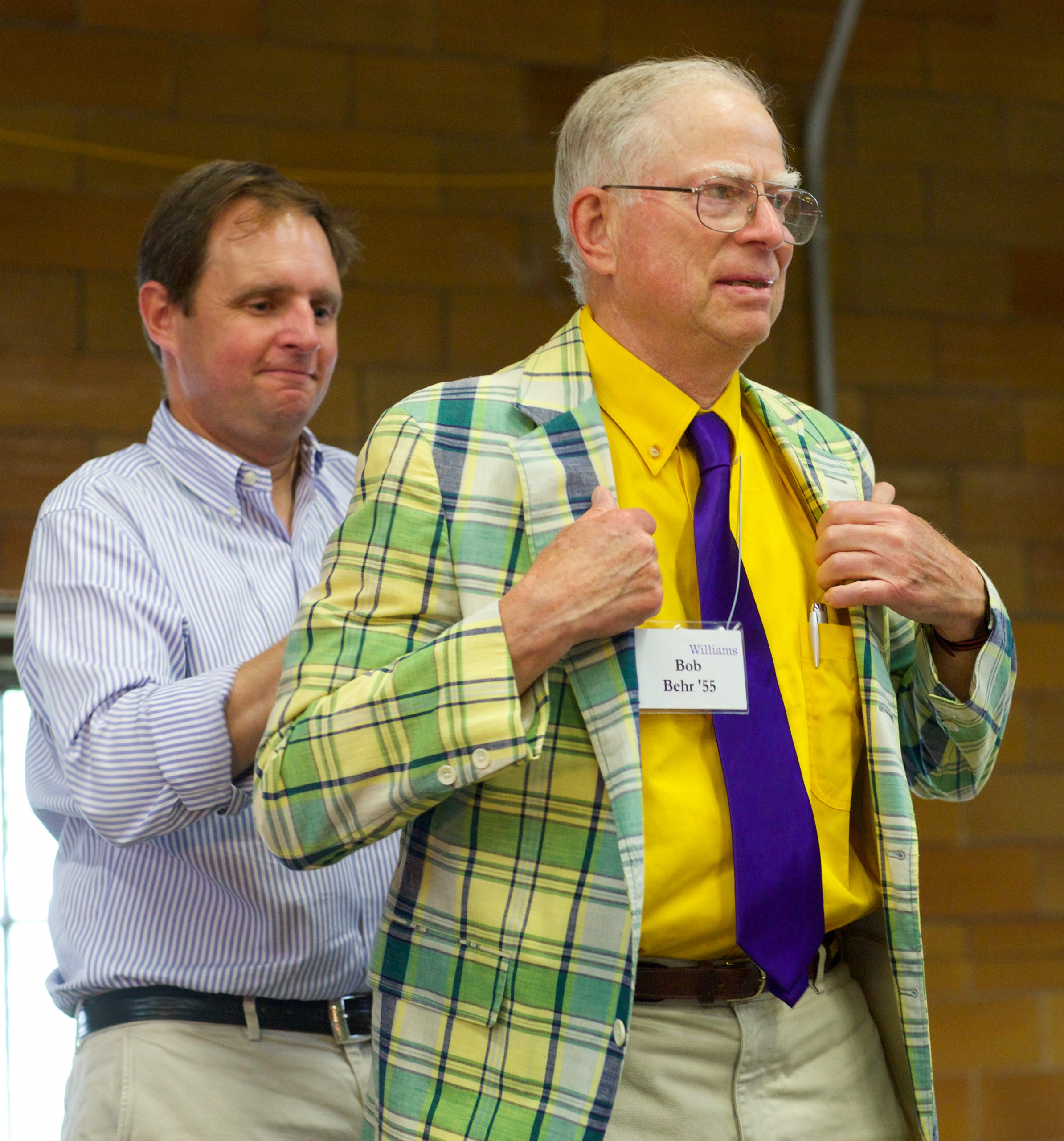 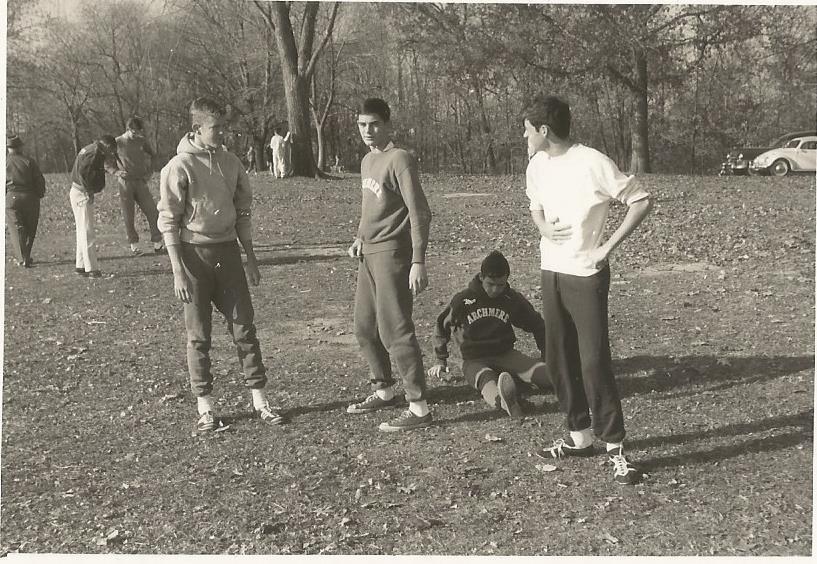 From 1964-1968, I ran for Archmere Academy and competed against Bob’s runners at many meets. Seeing Bob in action was a course on “leadership.” He was not a shouter; he didn’t berate. Bob gave sound guidance, in every aspect of the sport. It was obvious that he held high standards. I tried to listen and observe from a distance. (That’s me in the white sweatshirt and the pre-Adidas running shoes.)

During my high school career, I had successes and some failures, but two memories stand out. During one long winter, I simply showed up on a rainy day at Tower Hill to run in the school’s basement corridors with Bob’s team. He never said “you don’t belong here.” He let me listen, observe and participate.

And on the day that I ran for and lost — by 11 votes — Student Council president, I had to run the mile and half-mile against Tower Hill in the last dual meet of the season. In the final event (the mile), Bob managed to encourage his third-best runner to accelerate on the last curve of the track and nip me for third place. We lost the meet by a point. Afterward, Bob joined my coach in patting my back and commiserating with me about my sub-par 4th-place finish that killed our team’s chances. It was not gloating or condescension that Bob offered, but kindness.

The decades passed. I ran the Boston Marathon twice in my 20s and the New York Marathon at 36 and 40. I would brag a bit when I saw Bob at Williams reunions. But it was after serving in the Peace Corps in 2014 that I taped Bob’s photo to my refrigerator door.

I had returned from service in Ukraine with a mysterious lung ailment and pneumonia. I was angry and feeling sorry for myself because my Peace Corps service was cut short. But soon I made a counterintuitive decision: I returned to long-distance running. I set a goal of completing the Philadelphia Marathon in my adopted hometown.

There were many obstacles: the ongoing serious lung flare-ups; breaking my wrist in three places; the twisted ankles; and a life-threatening brain hemorrhage in 2016 that put me in intensive care for 13 days. Through it all, I could see Bob in my mind — the offeror of encouragement, the instiller of belief in oneself. He was the icon on the refrigerator door smiling in his Joseph’s Coat. I achieved my marathon goal in November 2018, not far from the “Rocky” statue in front of the Philadelphia Museum of Art. 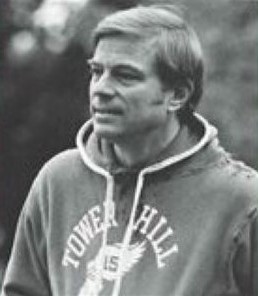 My most recent encounter with Bob came at my 45th and his 62nd reunion in 2017. As I entered Thompson Memorial Chapel for the alumni memorial service, there was Bob in the narthex, greeting people. I walked toward him with my hand outstretched and said, “Bob, it’s Andy.” He looked at me for a split second, flashed a sly smile and replied, “Here comes Bader around the last curve.” A great teacher and coach never forgets his student athletes … or his victories.

Bob Behr  died on Sunday, March 14th, 2021.
Please visit his remembrance page to share memories and read a full obituary of his life.
Support During the Pandemic
Ongoing Intellectual Curiosity