A is for Awesome 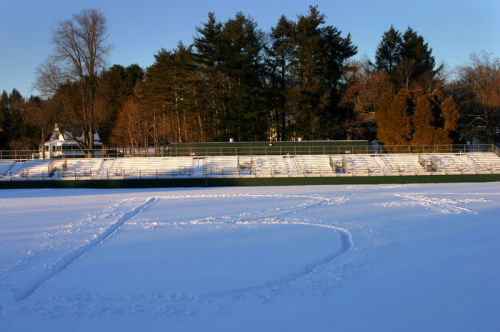 During the semi-annual Williams trivia contest in 2009, a question was asked about the legendary Eph’s response to the Lord Jeffs "burning [an] A into Weston field."  The correct answer to the question was "students went over to Amherst college and dug a Big B+ in the center of their football field."  This story has made its way into Williams lore, and evidently into multiple trivia contests.

I can say with complete confidence that the story is true … because I was the one who was responsible for it!

In the fall of 2003, some Amherst students came to Weston Field with weed killer and burned a great big “A” in the center of our field. However, this “A” didn't really become apparent until spring of 2004. I believe what happened is that the Amherst students attempted to redecorate the middle of our field in preparation for our homecoming game, but due to the cold and snow the weed killer didn't really have that much of an effect. Instead, the prank was more fully revealed in March and April, when the grass began to grow again and the area in the center of our field became a rather large, brown “A.” For most of the spring, our track team competed in a stadium with an “A” in the middle of it.

They must have been thinking “A is for Amherst”.

Oh, but how wrong those silly Amherst pranksters were.

A, in fact, is for awesome.

And Williams College is awesome.

Or, at least, that's what Dan Bahls ’04 pointed out to me during a discussion at some point that spring. From his common room window in Fitch in Spring 2004, we could see Weston Field and the “A” seared in the middle of it. Taking in the full view of this travesty brought us the obvious next question, “How can we get them back?”

The obvious approach, we knew, would be to go to Amherst with a larger amount of weed killer and put an even bigger “W” in the middle of their field. There were a couple of problems with this.

First, destroying an athletic field is not cool.  It turns out that Williams had to re-sod that part of the field, which, according to The Record, cost Williams five grand to repair. While I was told that this cost probably was just an additional increase on maintenance that would already have been done — Williams students are not the type of people who want to stick Amherst college with a massive repair bill.

Second, there were aesthetic considerations. A “W” in the middle of a football field wouldn't be the easiest thing to see, especially with the five-yard-lines stretched across it. We'd have to use a ton of weed killer, and have to have a pretty steady hand, in order to make the “W” apparent at all.

The main reason, though, was that putting a “W” in their field, no matter how big, would be conceding defeat. Amherst College came over to our field and put a great big A-is-for-awesome in the middle of our field. We could go back and put a W in their field, but no matter how big, it would still lack creativity. If we responded with a “W,” then we'd implicitly acknowledge that the A was, in fact, for Amherst.

But what if the “A” was a grade? As we continued our conversation over the course of  that spring evening, the idea became more striking. What if Amherst was really simply acknowledging our #1 U.S. News & World Report ranking?

Then surely we could go over to Amherst College and scribble a great big “B” in the middle of their field.

And to be sure the B was understood to be a letter grade, we thought we had better tack on a small plus at the top!

So was born the idea of the Amherst B+.

We didn't do anything right away, and indeed we gradually we forgot about our plan. Dan would go on to graduate in the spring of 2004 leaving the prank unaccomplished. By winter 2005, an academic year later, a quarter of the campus had turned over while the other three quarters forgot the prank had happened.

At some point during Winter Study of 2005, a conversation arose about pranks. I was reminded of the Amherst A-is-for-awesome — and, more importantly, I was reminded that the deed was as-yet unavenged. I still have the email I sent out to friends on January 27, sharing the plan Dan and I had imagined and offering up the two open spaces in my car to anyone who might want to join me on the trip I planned to soon take to Amherst College to avenger our Weston field.

It had been a good snow year up to that point, and there was about a foot of snow on the ground at Williams College. The snow I felt would make for excellent conditions for digging out an arbitrarily large letter. The snow would also completely remove the problem of the lines in the football field, as the lines would be obscured by the snowpack.  We wouldn’t have to deal with a five figure re-sodding bill.  And furthermore, should the snow ever melt a little and then freeze, it would be likely that the B+ would remain something of a fixture in the field (at least until the next massive snowfall!) and would attract attention from anyone who was passing by.

I corralled two enterprising co-conspirators — Anna Tsykalova ’07 and Dan Rosensweig ’08 — to make the trek at the end of winter study that year. We borrowed a set of classy Driscoll dining hall trays with which to dig out the snow, as none of us had shovels.

When we got to Amherst at about two in the afternoon, there were few footprints in the area. From the looks of it, the home of the Lord Jeffs was basically left their football field alone in the dead of winter - which was all the better for the pranking. So we got to work. We stomped out the back of the B, then the two semicircles for the front. Interestingly, though, we carved the upper curve larger than the bottom one. All in all, there was a fair bit of snow to shovel in order to make the B come out. We put the plus in last, but by the time we finished digging and snapped the picture the shadows had pretty much begun to cover the field, and it was slightly less easy to see our handiwork.

We made it out of Amherst without being stopped by Amherst students or security.

I believe that Anna and I sent the B+ photo off to both the Record and the Amherst student newspaper to show them what we did, but we didn't hear an official response back from either.  But we did have a celebratory meal to follow, and word got around.  When I graduated a year later, though, the majority of the campus had heard of the prank.  By the time I came back to campus a year or two later, I’d heard that it was mentioned in the Williams college pre-frosh admission tour, and referenced as a tale of times-gone-by.  And at one point, it was picked up by the New York Times and Guardian as a prank that had passed from the realm of fact and into the realm of lore.

As far as Amherst's response or attempt to further up the ante, I'm not sure there has been one to date. My hope is that it did make its way back to them in some fashion or other, in order to spur on a new generation of Williams pranksters, but I don't think I've heard of any Amherst attempts that were specifically designed to be a response to the Big B+.

I think it is fair to say that the Ephs win that round.

And yes, I did get five additional points in that trivia contest for “most original and detailed answer”.

So now, if you’re in a trivia contest, and should mention what happened when Amherst burned an A-is-for-awesome into the Williams football field, you can tell them the Eph response and show this photo evidence…

A Full Life
Increasing Understanding of Arabic Language and Culture